´There are already many applications for the new spirovitalisation therapy; even suitable for COPD patients?

Less physical activity leads to muscle atrophy, the cardiovascular system becomes affected. Unfortunately until today chronic diseases cannot be cured but it is possible to bring relief with the help of increasing the utilization of oxygen in the body cells.

Airnergy''s motto: “We cannot change the body but we can change the air we breathe.”

In combination with methods from popular medicine, energized air as it is produced with the Airnergy spirovitalisation is often used to treat COPD. Many reports of COPD patients reveal this severe chronic lung disease the Airnergy method can improve significantly the quality of life. Airnergy was the first one to develop a medical therapy that due to its holistic effects can be used as treatment for many different symptoms like COPD. Thanks to the experience of several million treatments the Airnergy method can be deemed as success. Furthermore Airnergy draw acceptance in conservative and popular medicine the world over. Airnergy is not only being used for treatment illnesses but can be used even for health prevention and regeneration purposes in the first place.

Airnergy is used in medical circles by doctors and patients but also in commercial institutions, companies and at home.

In October 2014, Airnergy has been awarded the Science Award of the IPO (International Prevention Organization).

The Airnergy Medical Plus device has been approved as a medical device according to the basic requirements of the Medical Device Directive 93/42/EEC. The device is using respiratory air (spirovitalisation), a process that can increase the energy available to the body from inhaled air. The procedure is used in naturopathy and other methods in conventional medicine. It can be used for preventive care and to support therapy for a wide range of applications such as COPD, AMD and MS including energy deficiency, burnout and sleep disorders.

For more information please look at:

Keep in mind: Airnergy equipments are 100 % Made in Germany 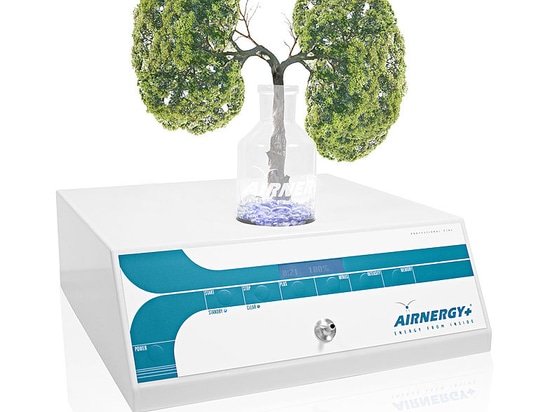