New suction units connected to the surgery network are especially comfortable. Using intelligent software (Tyscor Pulse, Dürr Dental) they automatically and in due time display intervalsand ensure an overview of all relevant status data at all times. This includes suction output, which can be easily adjusted from a PC. Any disturbances can promptly be remedied, and do not remain unnoticed to snowball into larger issues that could paralyse the entire unit.

Although high-quality, robust units usually run trouble-free for long periods of time, it is reassuring to have a system status displayed in ''black and white'' so that upcoming appointments can be reviewed at any time. This saves valuable work time and noticeably improves safety.

A half-century ago - new treatment positions

It was a milestone in dentistry when the first suction units were introduced to dental surgeries about 50 years ago. For the first time, dentists could work while patients lay comfortably. Working while laboriously bending over a patient became a thing of the past.

Thanks to radial compression, which derived from industrial applications into dental technology, dentists now have extremely compact and light-weight suction units (Tyscor, Dürr Dental). They deliver the same performance but save enormous amounts of energy in comparison to conventional systems and safeguard against failure. Compared to early prototypes from the sixties, these new devices work like a laptop or tablet compared to the first generation of computers in the seventies. A suction unit with this technology for two treatment stations is hardly any bigger than a kitchen microwave oven and can be set up anywhere in the surgery. Moreover, the small impellers and hybrid engine mount make the machine significantly quieter than comparable conventional units. Ever-increasing energy costs mean that electricity consumption carries ever more weight. Systems such as Tyscor from Dürr Dental require more than half as much power as previous units with the same performance. 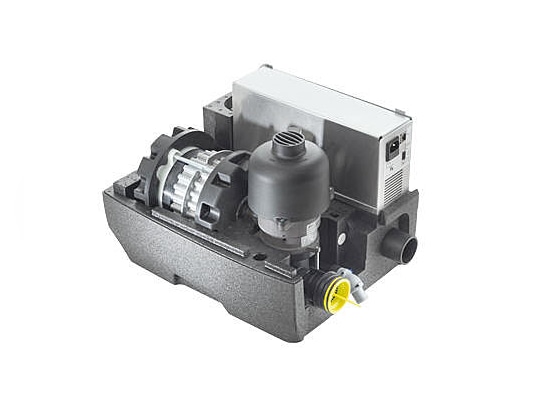