In the past decade, the medical transport helicopter has whisked more than 3,500 critically ill and injured children to the hospital's main campus from 28 northern Ohio counties for urgent medical care, Akron Children's Chief Nursing Officer Christine Young said during the birthday event.

"That speaks to the regional operation we've had in being able to provide this service," she said.

Air Bear is part of the hospital's transport operation, which also includes four ambulances that serve as mobile intensive-care units.

The $6 million helicopter is an airborne intensive-care unit, staffed with a critical care nurse, paramedic and respiratory therapist along with the pilot.

By using the helicopter, a one-hour ambulance trip can be shortened to about 20 minutes.

"When time is critical, Air Bear's role is to deliver pediatric patients from regional or community hospitals to the higher acuity services available at Akron Children's Akron campus, such as its pediatric and neonatal intensive care units, emergency department or pediatric surgical suites," Young said. "And because family-centered care is core to the mission of Akron Children's Hospital, we allow a parent to accompany their child during the flight."

The decision to use Air Bear versus ground transportation is made on a case-by-case basis, based on distance, medical necessity and weather.

Last year, about 200 of the 3,268 patients transported to the hospital by the transport team were taken via Air Bear.

The most common conditions that require a ride aboard Air Bear are trauma and respiratory issues and those needing immediate surgeries—"anything that is time sensitive," said Teresa Volko, the hospital's director of the transport leadership team.

The colorful aircraft is adorned with bright stars and a teddy bear dressed in pilot's garb, as well as the Akron Children's Hospital name and logo.

Air Bear is based at the hospital and owned by Med-Trans Corp. of Texas. The helicopter lands on helipads atop the main hospital or the Kay Jewelers Pavilion. 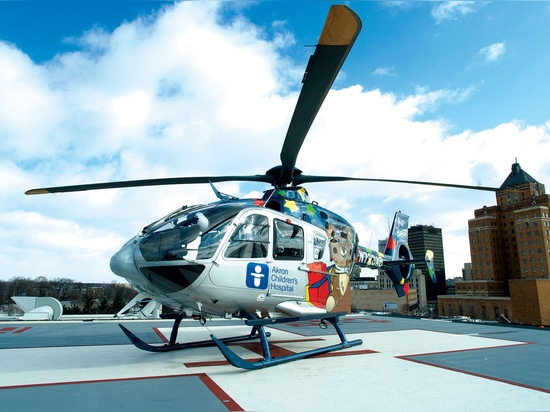