Jiankui He
China
Add to favorites

Jiankui He, the Chinese scientist whose efforts produced the world's first gene-edited babies, did so through forgery and subterfuge, deliberately skirting the proper channels in the pursuit of personal fame, officials in China told Xinhua News (China's state-run press agency).

A task force from the Health Commission of China in Guangdong Province conducted an investigation into He's activities, according to Reuters. In a preliminary report, authorities stated that He "intentionally dodged supervision" to produce genetically manipulated infants, an action that was "explicitly banned" by Chinese regulations, Xinhua reported. [10 Amazing Things Scientists Just Did with CRISPR]

He drew severe criticism from scientists around the world in November 2018, when he announced the birth of twin girls whose embryos he had genetically modified. Using the gene-editing tool CRISPR/Cas9, He removed a gene linked to HIV. However, many criticized his work as premature and irresponsible, with unknown future repercussions for the twins.

Investigators found that He's work "seriously violated ethical principles and scientific integrity," Xinhua News reported. Technologies used for the experiments did not have adequate safety and effectiveness guarantees, and He presented a fake ethical review certificate when he recruited eight volunteer couples for experiments conducted from March 2017 to November 2018, according to the investigation.

For the study, He selected couples in which the men tested positive for HIV, while the women tested negative. In China, people who are HIV positive are prohibited from medically assisted reproduction; to sidestep that regulation, He submitted blood tests from volunteers who did not have HIV rather than using blood from his HIV-infected subjects, Xinhua News reported.

In addition to He, all organizations and personnel involved in the research "will receive punishment according to laws and regulations," according to Xinhua News.

Southern University of Science and Technology, where He conducted his experiments, rescinded He's contract and terminated his research and teaching activities "effective immediately," according to a statement released yesterday (Jan. 21) on the university website.

Though gene editing has significant potential to benefit human health, He's experiment with viable human embryos appeared to many to be "a poorly designed and regrettable effort to win a 'race' and grab attention," Dimitri Perrin, a senior lecturer and an expert in gene editing and CRISPR technology at Queensland University of Technology (QUT) in Australia, said in a statement.

"This latest report confirms what was feared," Perrin said. "The long-term effects are still unclear. This experiment should not have taken place, and must not open the door to other similar studies at this stage." 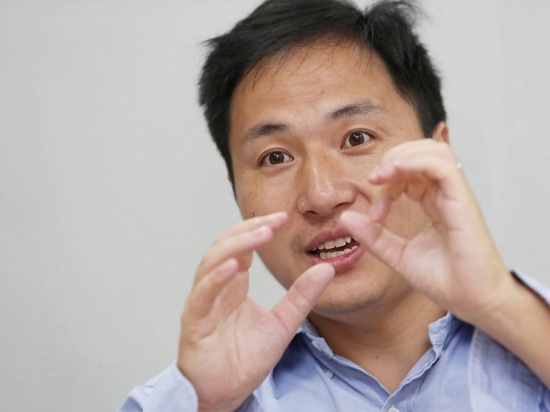 Scientist He Jiankui speaks at his company Direct Genomics in Shenzhen, China, on July 18, 2017.