Discovery Could Lead to New Treatments for Parkinson's, Other Brain Diseases

A small protein previously associated with cell dysfunction and death in fact serves a critical function in repairing breaks in DNA, according to new research led by scientists at Oregon Health & Science University.

The discovery, published today (July 29) in the journal Scientific Reports, marks the first demonstration of the role that alpha-synuclein plays in preventing the death of neurons in brain diseases such as Parkinson's, which affects 1.5 million people in the United States alone.

The findings suggest that it may be possible to design new therapies to replace alpha-synuclein's function or boost it in people with Parkinson's disease and other neurodegenerative disorders.

Aggregates of alpha-synuclein, known as Lewy bodies, have long been connected to Parkinson's and other forms of dementia.

The study published today casts a new light on that process.

The findings suggest that Lewy bodies are problematic because they pull alpha-synuclein protein out of the nucleus of brain cells. The study, which examined the cells of living mice and postmortem brain tissue in humans, reveals that these proteins perform a crucial function by repairing breaks that occur along the vast strands of DNA present in the nucleus of every cell of the body.

Alpha-synuclein's role in DNA repair may be crucial in preventing cell death. This function may be lost in brain diseases such as Parkinson's, leading to the widespread death of neurons.

"It may be the loss of that function that's killing that cell," said senior author Vivek Unni, MD, PhD, an associate professor of neurology in the OHSU School of Medicine.

Researchers found that the alpha-synuclein protein rapidly recruited to the site of DNA damage in the neurons of mice. In addition, they found increased double-strand breaks in the DNA of human tissue and mice in which the protein was clumped together in the form of Lewy bodies in the cytoplasm surrounding the cell's nucleus. Taken together, the results suggest that alpha-synuclein plays a crucial role in binding broken strands of DNA within the cell's nucleus.

Put another way: If alpha-synuclein are workers in a factory, it's akin to all of them gathering for an extended coffee break and leaving the machinery unattended.

Unni, who also sees patients in the OHSU Parkinson Center and Movement Disorders Program, said he hopes that these findings lead to the development of methods to deliver alpha-synuclein proteins into the nucleus of cells or designing methods to replace its function.

"This is the first time that anyone has discovered one of its functions is DNA repair," Unni said. "That's critical for cell survival, and it appears to be a function that's lost in Parkinson's disease. 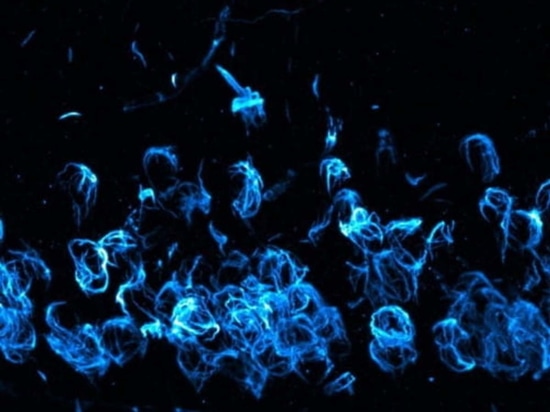 This image shows abnormal aggregated alpha-synuclein Lewy pathology within neurons of brain's hippocampus in a mouse model of Parkinson's disease and dementia with Lewy bodies. New research suggests that alpha-nuclein proteins repair DNA breaks within the nucleus of brain cells. When they cluster outside the nucleus, as shown here, it can lead to cellular dysfunction and death.