Patient Monitoring in the NICU

Monitoring devices for preterm infants haven’t changed much since the ’60s. But they’re about to.

Patient monitoring systems have made great strides since their birth in 1625, with the discovery of monitoring temperature and heart rate in humans. By 1896, devices existed to measure vital signs, including blood pressure, body temperature, heart rate, and breathing rate. Today, these signs are just a few of the metrics measured with patient monitoring devices, both in clinical settings and at home. The presence of these devices is predicted to parallel the growth of the patient monitoring equipment market, which is slated to surge at a 5.1% compound annual growth rate from 2019 to 2025.

So, what does this mean for the medical equipment sector? In short, the number of patient monitoring devices is steadily increasing; for whom, though, is the more important question.

As new monitoring devices are brought to market, it is important to be aware of their target populations. Many are designed to treat patients presenting with similar symptoms, but are not designed to account for differences among age groups. While some monitoring systems are safe for patients, ranging from newborns to the elderly, most are not. Due to the smaller body sizes of both children and newborns, such devices often prove incompatible with software built for adults. This leaves a large gap in technological advancements for children, creating an enormous need for new pediatric innovations.

Although this is an open market, the drive to create medical devices for this age group remains low. According to the Centers for Disease Control and Prevention, in 2015 there were 305,670 visits to physician offices among people 65 and older in the United States. In that same year, there were only 149,556 appointments among adolescents under 18 years of age. Because of this large discrepancy, the emphasis has been placed on the discovery of new medical devices and patient monitoring systems for older populations.

What people need to realize, though, is that this data is very misleading. Although the number of children’s visits was nearly half of the 65-plus cohort, the percentage of children seeking medical attention was not evenly distributed from birth to the age of 18. In fact, in 2012, the rate of office visits for infants under 1 year old was nearly four-times greater than that for children ages 12-17.

Contributing to this large statistic are the 380,000 preterm infants born each year in the U.S.—resulting in a definite need for medical technology advancement for this vulnerable population. With such a large population of infants in need of medical support, the neonatal intensive care unit(NICU) is a great place to introduce new technology to help improve health outcomes.

Fortunately, in the past few decades, the implementation of different patient monitoring systems has improved the quality of care for infants in the NICU. Specifically, respiratory, cardiac, and neurological monitoring systems now exist to enhance treatment and reduce mortality rates.

Another mainstay in the NICU is the electroencephalogram (EEG), which helps identify seizures in babies—whether silent or subclinical. It’s a good thing they’re there, indeed, since EEG monitors help inform treatment decisions and mitigate further injury. Other necessary patient monitoring systems in the NICU include the probe that measures the baby’s temperature and the pulse oximeter that measures the amount of oxygen in the child’s blood.

Such technologies are no doubt life-saving—but a common theme exists between them: Most of the monitors that currently exist in the NICU include a mass of wires that surround the infants, as well as aggressive skin adhesives that are required with existing hardware systems. Although these wires ensure health and safety, they constrain movement and limit skin-to-skin contact with parents. In addition, because a preterm infant’s skin is so fragile, the adhesive tape can cause skin irritation, blisters, and even infections.

A New Day in Patient Monitoring?

That’s not to say that considerable strides haven’t been made, however. Researchers are currently doing incredible work to develop new and improved ways to monitor the health of babies in the NICU.

Case in point: An interdisciplinary team at Northwestern University is developing soft, flexible wireless sensors that provide clinical-grade accuracy and precision while providing a more patient-centric approach—no wires or harsh adhesives needed. While such feats are tremendous, there is still room for more advancements in patient monitoring devices, especially those that care for infants in the NICU.

In fact, one major component of the body is still left unmonitored: the gut. This vital organ system is responsible for the digestion and absorption of nutrients, growth and brain development, and is the largest organ of immunity. But up until now, the gut has remained forgotten in the world of patient monitoring. As we near the end of 2019, it is known that the gut plays a vital role in the health of preterm infants. These babies present with immature gastrointestinal tracts, leading to susceptibility of infection, decreased metabolic function, as well as high rates of growth failure and neuro-developmental delays and disabilities.

Although the scientific knowledge in the field is increasing, finding how to effectively apply it in the NICU is where the difficulty lies. Currently, we have the technology to sequence stool and analyze it to determine the bacteria colonizing the gut, but this isn’t actionable information for a clinician. First, turnaround time for sequencing results is too long. Because the microbiome of a preterm infant changes so rapidly, by the time the sequence data is available, their microbiome has already changed, making interpretation irrelevant and intervention ineffective.

Second, neonatologists are not microbiologists. The sequence information alone does not provide a plan of action. It is not realistic nor cost-effective to obtain and sequence samples from every preterm infant at the bedside to monitor what’s happening in the gut.

This is where the next big technological advancement needs to happen, and healthcare companies are beginning to recognize that. For example, one organization is using the world’s largest set of microbiome profiles and corresponding clinical data to develop a digital diagnostic that leverages machine learning and requires only data found in the electronic medical record to provide a gut health score. It provides real-time quantification of gut inflammation, without the need for sequencing at the bedside.

Drawing on a comprehensive and proprietary dataset, it enables better decision-making through risk stratification. With a digital diagnostic that monitors the state of the gut, this innovation could change standard practices and fulfill unmet needs in the NICU—all in a non-invasive way without wires or tape.

Although the basic approach to monitoring infants is essentially the same today as it was back in the ’60s, change is on the horizon. We are entering a new era for patient monitoring devices for preterm infants, spurred by digital advancements. And as technological improvements are made in monitoring all of the vital organs—lungs, heart, brain, and gut—our tiniest and most vulnerable patients will surely reap the rewards. 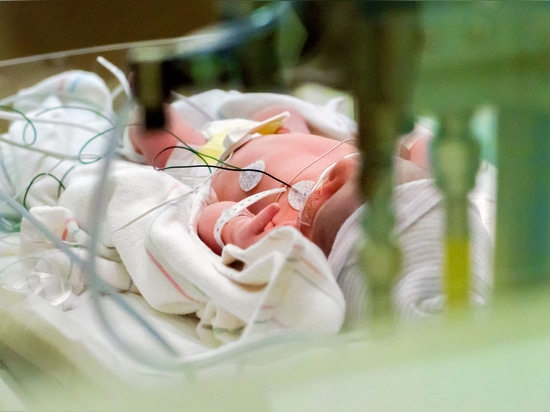