Scenario: A physiotherapist arrives in a ward pushing a new device towards a patient in bed. There, she introduces rehabilitation robot Robert and points to its multi-jointed arm. She places a cuff around the patient’s lower leg to link it to Robert’s arm and presses the start button; Robert raises the leg slightly.

Manually, the physiotherapist performs movements, which Robert memorises to independently repeat exactly as demonstrated. The movements can be freely set. If a patient moves abruptly, or any other unexpected forces occur, Robert stops immediately.

The first robot-based realisation of Robert was developed by Lasse Thomsen, founder (in 2014) of Life Science Robotics in Aalborg, Denmark, to help mobilise patients faster and more efficiently, whilst easing the burden on medical staff, the firm explained. In orthopaedic or stroke cases, for example, patients are encouraged to move joints and muscles regularly and intensively to hasten healing. Without mobilisation, complications such as restricted mobility can arise later. The easy-to-use rehabilitation robot Robert aims to prevent this.

At the local University Hospital, staff worked manually to rehabilitate patients, Rune Kristensen, CTO of Life Science Robotics, pointed out. ‘It was physically demanding and took a lot of time. The idea was to automate the process.’

Unfortunately, the prototype incorporated an industrial robotic arm. ‘We quickly realised it would be really difficult to obtain the necessary certifications for a medical product,’ Kristensen recalled. A medically compliant robot was the key to quicker and easier development.

KUKA and the LBR Med

‘We heard that KUKA had just developed the LBR Med, a lightweight robot intended specifically for medical applications,’ Keld Thorsen, LSR’s CEO, said. Meeting at KUKA’s HQ in Augsburg, it became clear that Robert and the LBR Med (already certified for medical use) belonged together. Implementation of the solution was tackled in a close cooperation. ‘KUKA provided us with the services of a development engineer who gave us detailed insights into how the robot works,’ Thorsen explained. Life Science Robotics hired a software developer specifically to create the human-machine interface. ‘KUKA supported us again during the familiarisation phase, enabling really fast progress,’ the CEO added. The greatest challenge was that Robert had to be very easy to handle, despite its high complexity. ‘After all, it’s operated by nurses or therapists, not by technical personnel,’ Kristensen underlined.

Since early 2017, the entire LSR team has invested time and expertise in Robert to develop a competitive robot solution and one, above all, suitable for everyday use, the company collaborates closely with Aalborg University Hospital – Robert’s initial birthplace – and other hospitals. The LBR Med, the only robot certified for integration in medical products, is facilitating the certification process. ‘Clinical tests have been running independently in eight different hospitals and nursing homes since September 2018. We have already received valuable feedback,’ Kristensen confirmed. ‘This enables us to offer not only a technologically smart solution but also one that provides effective relief for nurses and therapists in their everyday work.’

The tests also confirm very specific advantages. Robert works highly individually, flexibly, and with great accuracy. It can perform exactly the same movements over and over again – without interruption, fatigue or time restrictions. Therefore, Robert is delivering economical feasible rehabilitation. Nurses can be enabled to perform other duties, although still monitoring the patient, who can also be mobilised more frequently.

Robert is now active in Denmark, Poland and Finland, with further sales on the horizon. 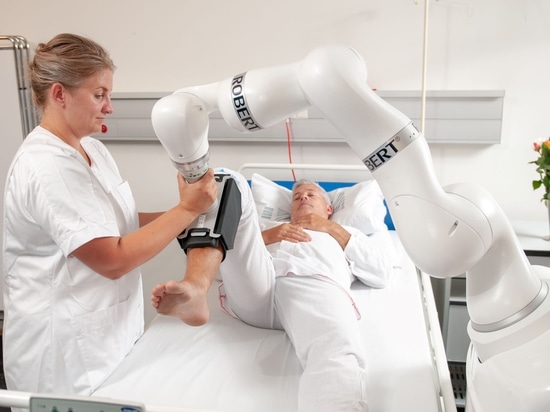 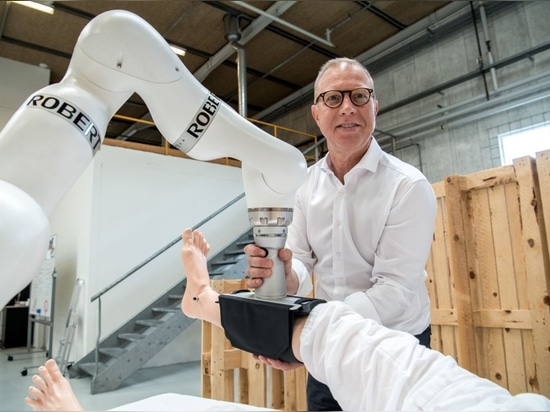