The casts, created by Spanish startup Xkelet, are waterproof, itch-proof, easily removed, and can be reused, eliminating the time and cost of recasting with traditional materials.

Anyone who has ever had to wear a cast can attest to the inconveniences they experience, such as difficulty in showering because the casts are not waterproof, not being able to swim, the heaviness of the cast, and not being able to scratch the inevitable itches. But now, with a new Red Dot Award-winning technology that uses 3D-printing, plaster casts may become a thing of the past, at least when it comes to treating sprains or light fractures.

Xkelet casts are 3D-printed using a SLS 3D printer with the waterproof and hypoallergenic PA2200 plastic material, which is compatible with ISO 10993-1. The casts are lightweight, weighing less than 100 grams.

“[The material] is biodegradable, and we can put it in many different colors,” said Tim Dobrinich, COO and co-founder of TriMed, in an interview with MD+DI. TriMed is a major distributor of the casts from Exiom, which owns the exclusive U.S. rights to the products. TriMed also installs and trains medical practitioners who want to provide this service.

“What's nice about this product is that it's very breathable, it's very lightweight,” said Dobrinich. “If you have an itch, you can get in there and scratch, you can shower with it, you can swim with it. So, you can become a lot more active.” He cautions that the casts are not suitable as a replacement in every situation, but they are optimal for light fractures or sprains, or something like carpal tunnel syndrome.

Xkelet is not the first company to develop custom-made 3D printed casts, but it is the first to make its technology scalable. This is due to its reliance on its own iPad app instead of needing to use costly 3D scanning equipment.

The process for creating a cast starts with using an iPad, said Dobrinich. “There's a scanner that attaches on the outside [of the iPad] where the photo lens is, and within 10 seconds we can go around with the iPad and scan,” he continued. “The next screen that comes up on the iPad is the actual scan, and it will calculate the dimensions around the wrist area up to the thumb, depending on how much they're going to brace,” he explained. “And then if that looks good, it simulates the actual cast.” The image can then be rotated to make sure everything looks right, and then it is sent to production in the 3D printer.

Currently, the printing process takes about two hours, he said. “Obviously, that's about two hours too long, but eventually the goal is, with these new printers, is to print in 12 to 30 minutes.”

Xkelet casts can be removed and reused using the o-rings incorporated into the designs, which is convenient for recasting the same injury. They can also be designed so that they can only be removed using a special tool for use with children or others who may inadvertently remove them.

The casts are considered Class 1 devices and are commercially available in the United States to treat wrist and arm injuries, and products for other areas of the body are in the works. “We're going to come out with [a cast for] the whole arm, where it comes up past the elbow into the bicep, also the foot and ankle, and then we're looking at a full leg brace as well,” Dobrinich said. 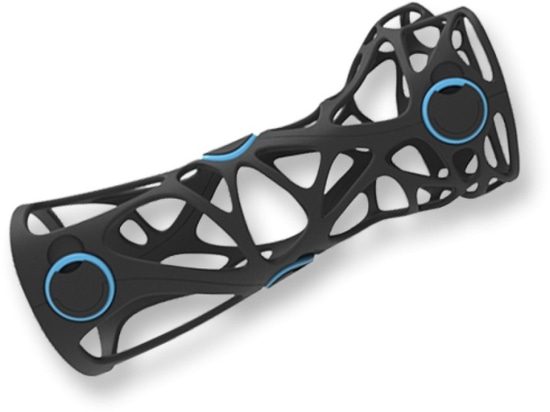 Images of the Xkelet cast courtesy of TriMed, a major distributor of the casts from Exiom, which owns the exclusive U.S. rights to the products. 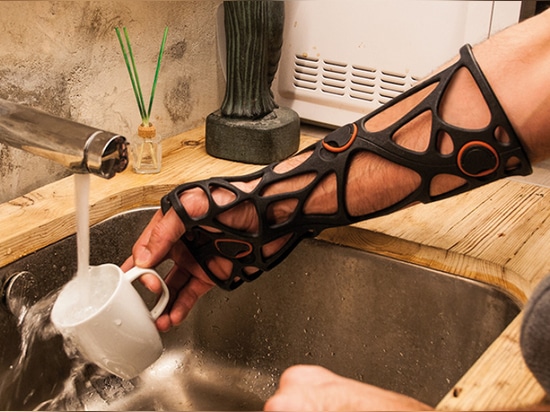