Researchers at the University of Helsinki have developed a smart jumpsuit for children as young as five months, that tracks body movement in great detail.

The system may allow clinicians to identify neurodevelopmental disorders in children more easily, potentially allowing for earlier intervention and support for such children.

At present, assessing children for the presence of certain neurodevelopmental disorders, such as cerebral palsy, involves a clinician or physiotherapist closely watching a child’s movements. This typically occurs at a clinic, but kids’ movements may be different to those they produce at home.

To address this, and make the process of detecting such disorders a little easier, these researchers have developed a smart jumpsuit that can provide long-term monitoring of movement. “The smart jumpsuit provides us with the first opportunity to quantify infants’ spontaneous and voluntary movements outside the laboratory,” explained Sampsa Vanhatalo, a researcher involved in the study. “The child can be sent back home with the suit for the rest of the day. The next day, it will be returned to the hospital where the results will then be processed.”

The suit contains multiple sensors that provide accelerometer and gyroscope data on movement, and a machine-learning algorithm interprets the data to provide information on movement types and posture. Vanhatalo and his colleagues claim that the new system can quantify and track child movements as reliably as a human observer.

“This is a revolutionary step forward,” said Vanhatalo. “The measurements provide a tool to detect the precise variation in motility from the age of five months, something which medical smart clothes have not been able to do until now.”

The researchers hope that the convenience of the jumpsuit could mean that neurodevelopmental disorders are detected earlier, allowing clinicians and parents to begin supporting the child at an early stage. Significant brain plasticity in early childhood means that early intervention could provide long-term benefits. Moreover, the suit could also help researchers to identify whether interventions are working in terms of reducing motor deficits.

“The early identification of developmental disorders and support for infants’ everyday functional capacity in interaction with the family and the growth environment constitute a significant factor on the level of individuals, families and society,” said Leena Haataja, another researcher involved in the study. 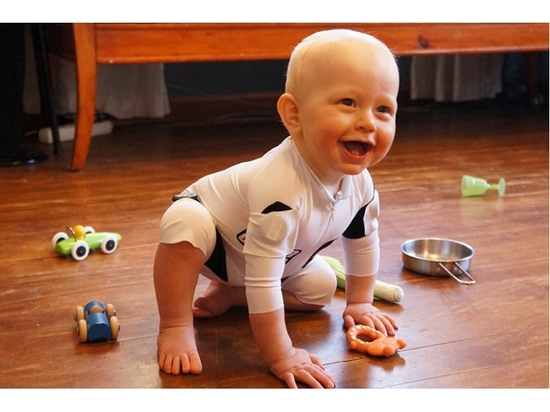