Researchers recently discovered that a person with a spinal cord injury can use a brain-computer interface to simultaneously reanimate both motor functions and sense of touch.

For the first time in 10 years, Ian Burkhart is able to move his arm and feel what he is touching. The findings were reported late last month in the journal Cell.

Burkhart, who suffered a spinal cord injury (SCI) in 2010 leaving him paralyzed, was the first participant in a five-year study of Battelle's NeuroLife neural bypass technology, a project Battelle has worked on in conjunction with doctors at The Ohio State University Wexner Medical Center. MD+DI previously reported on the study in August 2019, and in April 2016. The latest breakthrough came from analysis of years of data collected from the study with Burkhart.

“When the chip was placed on the surface of Ian’s motor cortex in 2014, it was not known that the signals related to object touch could be observed because of the paralysis,” said lead author and Battelle Principal Research Scientist Patrick Ganzer. “Furthermore, Ian has a very severe SCI that should essentially block hand touch signals from even reaching the brain.”

However, analysis has shown that subperceptual touch following a spinal cord injury affects Burkhart’s motor cortex even though there is essentially a block from the nerves in his arms and their connection back to the brain. Importantly, this subperceptual signal can be detected in the brain, rerouted via the brain-computer interface, and sent back to a wearable haptic system to restore the sense of touch.

“It has been amazing to see the possibilities of sensory information coming from a device that was originally created to only allow me to control my hand in a one-way direction,” said Burkhart.

Medical technologies like these that provide both movement and sensation back to their users has the potential to improve independence.

“Helping people to become more whole again and less dependent on caregivers is a major step in improving quality of life,” said Justin Sanchez who is a Battelle Life Sciences Technical Fellow.

Battelle’s NeuroLife team is currently working toward a take-home brain-computer interface (BCI) system for individuals with tetraplegia that addresses user needs by leveraging the knowledge gained in the five-year clinical study. The goal is to provide technology options to these individuals to improve their everyday lives.

“This work represents an important milestone in the development of BCIs for restoring hand functions after SCI,” said Douglas Weber, co-investigator and an associate professor of bioengineering at the University of Pittsburgh. “Ian has demonstrated that by recovering even simple touch sensations, his ability to control his hand through BCI improves dramatically.” 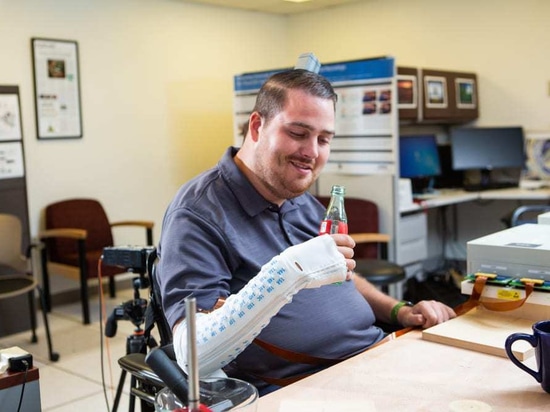 Ian Burkhart, the first participant in a five-year study of Battelle's NeuroLife neural bypass technology, a project Battelle has worked on in conjunction with doctors at The Ohio State University Wexner Medical Center.