A group of researchers at the University of São Paulo's Engineering School (POLI-USP) in Brazil have developed a mechanical ventilator that costs only approximately 7% as much as a conventional ventilator. Called Inspire, it has an open patent allowing royalty-free manufacturing, although as a life support device, its distribution is controlled.

A pilot batch will be produced by the Brazilian Navy for use in clinical trials. Twenty companies are interested in making the ventilator, which has already been tested in animals and humans.

"Our ventilator is designed to be used in emergencies where there is a shortage of ICU ventilators, which are more monitored, but it has all the functionality required by a severe patient. It also has the advantage of not depending on a compressed air line, as conventional ventilators do. It only needs an electric power outlet and piped oxygen (O2) from the hospital or even bottled O2," said Raul Gonzalez Lima, a professor at POLI-USP and principal investigator for the project.

Lima has been working for approximately 20 years, with São Paulo Research Foundation - FAPESP's support, on the development of electrical impedance tomography (EIT) technology to monitor and optimize mechanical ventilation in ICUs. Monitoring these patients can mitigate side effects, shorten the weaning process and minimize the duration of mechanical ventilation.

From Lima's group came some of the researchers who founded Timpel, a manufacturer of tomographs used by hospitals in Brazil and abroad. The startup was supported by FAPESP via its Innovative Research in Small Business (PIPE) program. Inputs and raw materials for Inspire are easily acquired in Brazil. The device takes no more than two hours to produce, for a cost of BRL 1,000 (currently approximately USD 170), compared with an average cost of BRL 15,000 for conventional ventilators.

In developing the ventilator, the researchers needed to analyze the range of oxygen flow rates and levels it could offer patients. For this purpose, they simulated the various breathing frequencies of human lungs using a gas analyzer and gas flow meter at the Advanced Combustion Diagnostics Laboratory run by the FAPESP-Shell Research Center for Gas Innovation (RCGI). The RCGI is hosted by POLI-USP under FAPESP's Engineering Research Center (ERC) program.

The researchers are now preparing a clinical trial with a larger number of patients. This will be one of the last steps before production of the ventilator is approved by ANVISA, Brazil's national health surveillance authority. 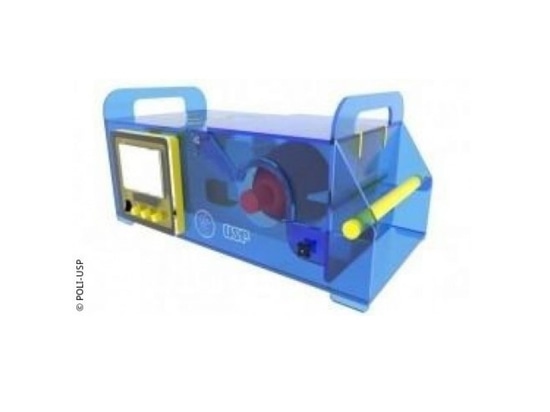 Created at the University of São Paulo's Engineering School (POLI-USP), the machine costs approximately 7% as much as a conventional ventilator.