Home after treating Ebola patients in Liberia, Colin Bucks, MD, continues to help in the fight against the disease.

After 21 days of home isolation, Stanford emergency physician Colin Bucks, MD, emerged Nov. 14 to a kind of hero’s welcome, besieged by well-wishers and health professionals around the world eager to learn from his experience of treating Ebola patients in West Africa.

Bucks said he feels he left a big part of himself behind with the patients and staff still grappling with the deadly disease at the remote jungle clinic, in northeast Liberia, where he volunteered for a month.

“My heart is still there because I know how hard they’ve been working,” he said during a rare break between meetings and phone calls. “I’m always thinking, ‘How is it going? Were they able to accomplish something we’d hoped to accomplish? And how are my friends — the Liberian staff — holding up?’”

A volunteer with the International Medical Corps, Bucks treated some 130 patients with Ebola at the clinic. For weeks after his return, he tracked the clinic’s database of his patients to see who lived and who died. He said it’s always hard to lose a patient, whether in Liberia or California, though the losses in Liberia have been high, with dozens of fresh graves filling a two-acre plot near the treatment site.

“It’s natural to be upset at the mortality. You just have to turn that energy into the next step — what you can do to improve the care,” said Bucks, clinical assistant professor of surgery at the School of Medicine.

Though precise figures aren’t yet available, he said the care provided at the clinic surely saved lives. “Our gut sense was that we were making a difference — we were resuscitating people,” said Bucks, who also serves as the Marc Andreessen and Laura Arrillaga-Andreessen Director of Disaster Preparedness at Stanford Health Care.

‘Risk was predictable and manageable’

Bucks, 44, came back to California at a time of public-health chaos over quarantine policies for returning health-care workers. He cooperated with San Mateo County authorities by confining himself to his Redwood City home for the requisite 21 days. He also hoped the measure would help calm public anxiety. In the meantime, his wife and dog stayed at a nearby hotel.

Tall and lanky, he re-emerged more than 10 pounds lighter and clean-shaven. He was feted at a party thrown by colleagues at Stanford’s emergency department, who ordered cupcakes with his face printed on them. (He couldn’t bring himself to eat one.)

While in quarantine, he started working with organizations to improve patient care in West Africa and recruit more clinicians to volunteer to help contain the virus, which has infected more than 15,000 people, according World Health Organization figures. While in Liberia, he said he didn’t fret about the possibility of contracting the disease, as he saw the odds as “infinitesimally small,” given the intense infection-control procedures in place at the treatment site, where every surface was drenched in virus-killing chlorine.

“One of the physicians who had been to Afghanistan and Syria put it in good perspective,” said Bucks, a veteran of many disaster-response efforts. “He said it’s far scarier to worry about a car bomb than to manage Ebola. The risk was predictable and manageable.”

Though he is an emergency physician, Bucks said the usual emergency protocols weren’t applied in Liberia because of infection risk. For instance, if a patient suffered a seizure, the clinicians could not rush to his or her side, as it took at least nine minutes to don protective gowns, gloves, goggles and boots. “You don’t dash in,” he said.

And clinicians did not respond to a “code” to revive a patient with major organ failure, as the prospect of infection was too great and the odds of survival too small at that stage of disease.

He said the caregivers focused as much on providing emotional and psychological support as physical care. “For the patients who arrived there, it’s a completely alien place. We were very cognizant of that adjustment and what they were going through. We had dedicated mental health specialists helping patients and families. They had a tough job,” he said. “I had a spectrum of human emotions. I got the uplifting stuff, the daily mundane stuff and some really sad moments. The psychiatrists and social workers got nothing but the tough stuff, having to inform families and take them to funerals.”

He said he developed friendships with the Liberian gravediggers who came day after day to bury their fellow community members. “I cherished all my interactions with the gravediggers. They were hard-working characters,” he said, as well as the source of some macabre humor. He smiled at the memory of them rejecting chocolates, a gift from a foreign film crew. “You’re giving us candy?” he recalled them saying. “Candy is for children. Why didn’t you give us palm wine? We need a drink.”

Despite the reported decline in Ebola cases in Liberia, he said the 52-bed clinic today remains busy. The facility is upgrading its services, acquiring an ultrasound machine and new lab equipment and developing better methods for tracking patients, as it’s been difficult to maintain either paper or electronic records in the wet environment.

“The numbers in Liberia are encouraging, but it too early to say that the epidemic is nearing its end. I’m hopeful major public health education has had an impact, especially in the way funerals were conducted, as they were a major source of spread,” he said. “But it’s too easy to be complacent, which would just lead to a rise in the number of cases.”

Since his return to California, Bucks has been much in demand as a member of a small cadre of clinicians who have had direct experience with Ebola. He’s been working with health professionals at universities and nonprofits around the world who are doing research on new approaches to combating the disease, tracking trends in the epidemic and developing new designs for protective gear, which are cumbersome and stifling, he said.

“The heat stress is massive,” he said. “Your vision is limited. So anything we can do to improve PPE [personal protective equipment] will help improve patient care.”

During his quarantine, he said he did not have a moment of boredom; he was on the phone for 15 hours at a stretch consulting with health experts across the country on Ebola preparedness and on the needs in West Africa. (Stanford paid him during this time.)

And though health officials checked in with him twice daily by phone during his quarantine — he never showed any symptoms of the disease — he worried he might contract some garden-variety virus that would trigger a major public health “hullaballoo.”

“I was nervous I’d have some simple virus that would precipitate a multi-million-dollar evaluation,” as the hospital would have to clear out a unit for him while Ebola was ruled out as a possible cause.

He has yet to return to clinical duties but is actively involved in his disaster-preparedness work at Stanford Health Care. He is spending a lot of time at the School of Medicine’s Center for Immersive and Simulation-Based Learning, where Stanford Medicine doctors and nurses have been using mannequins to rehearse patient-care procedures to prepare for the unlikely event that a patient with Ebola comes to Stanford. 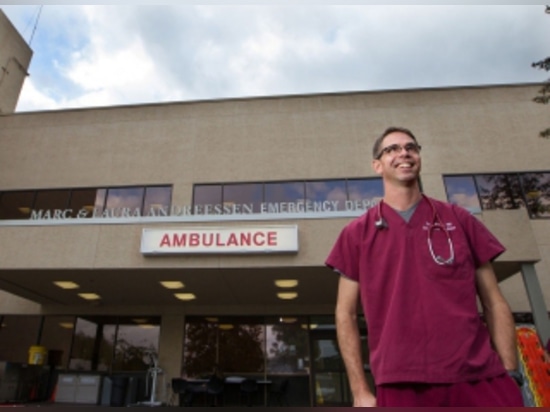 As a volunteer with the International Medical Corps, Colin Bucks treated some 130 patients with Ebola at a clinic in Liberia. Norbert von der Groeben