Augmented Reality Telemedicine Shown to be Effective for Battlefield

A team of researchers from Purdue University and the Indiana University School of Medicine has recently developed and now demonstrated, in realistic simulations, a telemedical augmented reality system that can be used in very difficult and stressful situations.

Called System for Telementoring with Augmented Reality (STAR), it allows remote clinicians, such as surgeons, to guide military medics, paramedics, and others in how to perform emergency procedures.

The STAR system revolves around an augmented reality headset that’s worn by the person on the scene. Video from a forward facing camera on the headset is transmitted in real time to a remote clinician who can annotate the scene using a touchscreen tablet. The annotations immediately appear in the view of the person taking care of the stricken patient and where the clinician wanted them to. This allows for a precise explanation of what needs to be performed and where.

The system was just tested with a variety of volunteers in a simulated battle-like environment. Subjects were asked to perform a cricothyroidotomy, an incision that creates a patent airway at the neck when the regular breathing pathway is obstructed, while being distracted by the sounds of gunshots, helicopters, explosions, and actual smoke. The performance of the participants was compared with that of those who received clinical guidance using only voice, without the benefit of augmented reality. The volunteers did much better using the STAR system, performing the cricothyroidotomies faster and more correctly than those who only heard voice instructions.

The system is still in a prototype stage, as it will need to be integrated into a more robust headset than that used now. Nevertheless, the majority of the technology is pretty much ready for use in a variety of scenarios including space flight, military, and remote medicine. 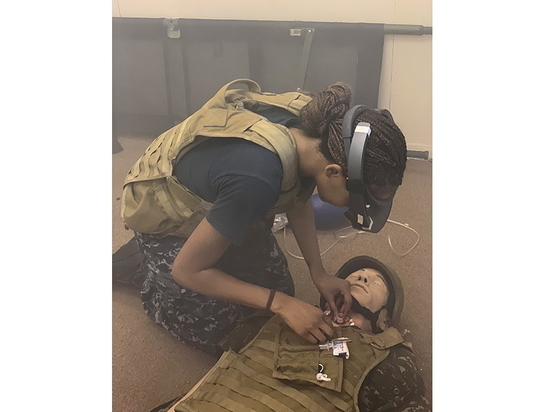