Scratch your nose. Write a text message. Reach for a glass of water. Most people take these simple movements – brain-hand behaviors – for granted. But little is actually known about how the brain interacts with the body's upper limbs to create these behaviors, said Scott Frey, Miller Family Chair in Cognitive Neuroscience at the University of Missouri.

Frey's interest in brain-hand communication began as a child after his mother was diagnosed with multiple sclerosis, or MS, a disease that affects the brain and spinal cord. As his mother's condition deteriorated, he became acutely aware of the complexity of the body's nervous system, and how much a person's normal everyday life depended on its proper function, including the use of a person's hands. Now, as the director of MU's Rehabilitation Neuroscience Laboratory, Frey studies how a person's brain responds to the loss of a hand, literally or functionally.

"I became interested in how the brain controls the hand at a young age because I was raised by a single mother who suffered from MS," Frey said. "She really struggled with things that most of us take for granted – balance, walking and unfortunately, hand function. I grew up going to various appointments with my mom, and I remember being aware of how vitally important it was to have functioning hands in order to be an independent person. As an only child, in many instances I was literally my mom's hands."

Frey has been developing a technique that involves using small wireless sensors, similar to a wearable commercial fitness device, to gather data on limb and prosthesis use in hand amputees. Now, he's received a $1.5 million grant from the U.S. Department of Defense to use these sensors to gather information about how people with severe upper limb injuries – that do not involve amputations – function in everyday life.

"Clinicians can evaluate people in the clinic or a lab to try to get an idea of the extent to which people can function, but we don't really know how people are truly functioning when they go home," Frey said. "Hand injuries, as you can imagine, present some real challenges to people's everyday functions because we use our hands for pretty much everything. So, we thought it would be helpful to have direct insights into how people are responding to treatment in their everyday lives, and everyone responds differently."

Frey will work with an interdisciplinary team of clinician-scientists at John Hopkins University, Ohio State University and Washington University in St. Louis to compare the standardized ways clinicians evaluate hand behavior and function in a clinic or laboratory setting versus the actual use people make of their limbs while going about their everyday lives. This information will also help hand surgeons at these partner institutions make better informed decisions and be able to personalize an individual's treatment and recovery to fit their daily needs. Clintin Davis-Stober, a professor of psychological sciences at MU, will also be working with Frey to develop advanced data modeling based on the data they receive.

"This method really allows us to see how people are responding to treatment, how people are recovering from their injuries, how much they are utilizing the injured limb versus the healthy one, and track all of these changes over time," Frey said. "We will be looking at a group of 60 people with limb trauma and evaluating them for a continuous seven-day period each year for three years. This is the first study to use this kind of technology with this population and also track it in a longitudinal way."

Frey, who has worked for over two decades on how the brain controls the hands, continues to find ways to keep his enthusiasm going. 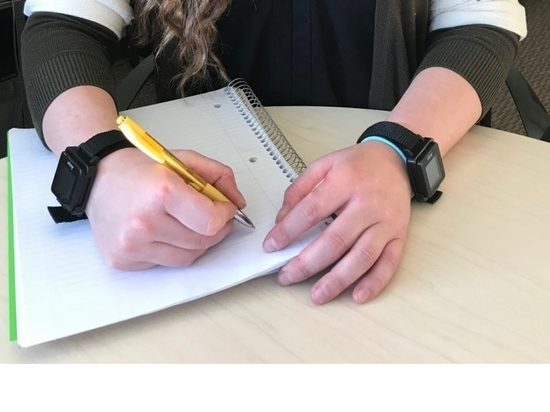 Small wireless sensors, similar to a wearable commercial fitness device, gather data on limb and prosthesis use in hand amputees.