The technique, which captures brain movement in real time, could be used as a diagnostic tool for difficult-to-spot conditions

Magnetic Resonance Imaging (MRI) images are usually meant to be static. But now, researchers from Mātai Medical Research Institute (Mātai), Stevens Institute of Technology, Stanford University, the University of Auckland, and other institutions, report on an imaging technique that captures the brain in motion in real time, in 3D and in stunning detail, providing a potential diagnostic tool for detecting difficult-to-spot conditions such as obstructive brain disorders and aneurysms—before they become life threatening.

Samantha Holdsworth, director of research at Mātai, senior lecturer at the University of Auckland and principal investigator at the Centre for Brain Research, and Mehmet Kurt, an assistant professor of mechanical engineering at Stevens Institute of Technology, have now published two papers on aMRI in collaboration with Stanford University, the University of San Diego California, Queens University, and the Icahn School of Medicine at Mount Sinai.

The first paper, published online today in Magnetic Resonance in Medicine, presents the 3D aMRI method, comparing it with its 2D aMRI predecessor. The new method results in a stunning visualization of the human brain's movement that can be seen in all directions. The second paper, published online today in Brain Multiphysics, visualizes, validates, and quantifies both the amplitude and direction of the brain as it moves in three-dimensional space. The validation and quantification ensures that the software processing reflects an amplified version of real movement.

The approaches reported in the two papers could hold important clinical insights for a number of brain disorders. For example, the abnormal motion of two areas at the base of the brain, the pons and cerebellum, has been proposed as a diagnostic marker of Chiari I malformation, an abnormality that causes brain tissue to extend into the spinal canal.

2D amplified MRI was developed by Holdsworth, Mahdi Salmani Rahimi, Itamar Terem, and other collaborators at Stanford, enabling MRI imaging to capture brain motion in a way that had previously never been seen before. 3D amplified MRI builds on this previous work developed and published in 2016. The aMRI algorithm uses a video motion processing method developed by Neal Wadhwa, Michael Rubinstein, Fredo Durand, William Freeman, and colleagues at Massachusetts Institute of Technology.

"The new method magnifies microscopic rhythmic pulsations of the brain as the heart beats to allow the visualization of minute piston-like movements, that are less than the width of a human hair," explained Terem, a graduate student at Stanford and lead author of the first paper. "The new 3D version provides a larger magnification factor, which gives us better visibility of brain motion, and better accuracy."

3D aMRI of the human brain shows minute movements of the brain at an unprecedented spatial resolution of 1.2mm3, approximately the width of a human hair. The actual movements are amplified (made larger, up to 25 times) to allow clinicians and researchers to view the movements in detail. The striking detail of these animated magnified movements may be able to help identify abnormalities, such as those caused by blockages of spinal fluids, which include blood and cerebrospinal fluid.

"We showed that 3D aMRI can be used for the quantification of intrinsic brain motion in 3D, which implies that 3D aMRI holds great potential to be used as a clinical tool by radiologists and clinicians to complement decision making for the patient's treatment," said Mehmet Kurt, from the Stevens Institute of Technology and senior author of the second paper. "In my lab at Stevens, we are already seeing the benefits of using variants of 3D aMRI technique in a variety of clinical conditions including Chiari Malformation I, hydrocephalus, and aneurysms, in collaboration with clinicians at Mount Sinai."

A number of research projects are underway using the new imaging software. Holdsworth said, "We are using 3D aMRI to see if we can find new insights into the effect of mild traumatic brain injury on the brain. She added, "One study already underway, a collaboration between Mātai and the University of Auckland, uses 3D aMRI together with brain modeling methods to see whether we can develop a non-invasive way of measuring brain pressure, which may in some cases remove the need for brain surgery." This could be valuable clinically, for example, in children with idiopathic intracranial hypertension who often require invasive brain pressure monitoring.

Miriam Sadeng, an associate professor at the University of Auckland in the department of anatomy and medical imaging, who is a physician and is an author on both papers said, "This fascinating new visualization method could help us understand what drives the flow of fluid in and around the brain. It will allow us to develop new models of how the brain functions, that will guide us in how to maintain brain health and restore it in disease or disorder."

"Validating the method through computational modeling gave us further confidence about the potential impact of this work," said Javid Abderezaei, a graduate student in Kurt's lab at Stevens and lead author on the second paper. "What is exciting to see is that the dominant displacement patterns in the healthy brain qualitatively matched with the underlying physiology, which means that any changes in the physiological flow as a result of a brain disorder should be reflected in the displacements we measure."

The capability to view the differences in brain motion could help us better understand a variety of brain disorders. In the future, the technology could be expanded to use in other health disorders throughout the body.

- This press release was provided by the Stevens Institute of Technology 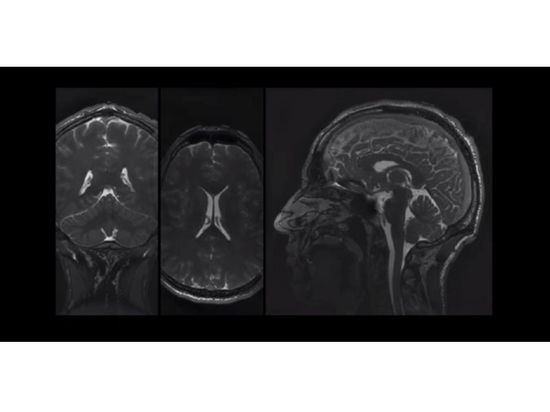 The 3D aMRI method, showing exquisite brain motion that is captured in all three planes of the brain (coronal, axial and sagittal views). Previously amplified motion was only reliably visible in the sagittal plane—the 3D aMRI method now captures motion in all planes.