Researchers construct a gallium nitride optical microcavity with high reflectivity distributed Bragg reflectors to double the frequency of incoming light, which may be utilized for a safe and practical deep UV light source with bactericidal effects.

The researchers from the Graduate School of Engineering and the Center for Quantum Information and Quantum Biology at Osaka University unveiled a new solid state second-harmonic generation (SHG) device that converts infrared radiation into blue light. This work may lead to a practical daily-use deep ultraviolet light source for sterilization and disinfection.

Recently, deep ultraviolet (DUV) light sources have been attracting much attention in sterilization and disinfection. In order to realize a bactericidal effect while ensuring user safety, a wavelength range of 220-230 nm is desirable. But DUV light sources in this wavelength range that are both durable and highly efficient have not yet been developed. Although wavelength conversion devices are promising candidates, conventional ferroelectric wavelength conversion materials cannot be applied to DUV devices due to absorption edge.

The researchers proposed a novel monolithic microcavity wavelength conversion device without a polarity-inverted structure. A fundamental wave is enhanced significantly in the microcavity with two distributed Bragg reflectors (DBR), and counter-propagating second harmonic waves are efficiently emitted in phase from the one side. As the first step towards a practical DUV light source, a gallium nitride microcavity device was fabricated via microfabrication technology, including dry etching and anisotropic wet etching for vertical and smooth DBR sidewalls. By obtaining a blue SH wave, the effectiveness of the proposed concept was successfully demonstrated.

"Our device can be adapted to use a broader range of materials. They can be applied to deep ultraviolet light emission or even broadband photon pair generation," senior author Masahiro Uemukai says. The researchers hope that because this approach does not rely on materials or periodically inverted structures, it will make future nonlinear optical devices easier to construct. 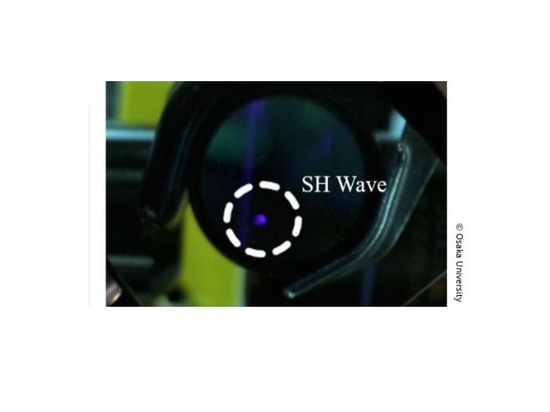