Researchers at Nanyang Technological University in Singapore created a flexible battery that is powered by sweat.

The device could provide a new way to energize medical wearables, some of which already use sweat to detect or monitor disease. The stretchable device incorporates silver flakes that clump together and generate a small electrical current in the presence of sweat.

Medical wearables are becoming increasingly ubiquitous. The ability to monitor vital signs or disease progression using such an unobtrusive and convenient technology has obvious advantages. However, in the interests of the environment, moving away from traditional battery technologies would be advantageous, and what could be better than allowing your body to power your wearable?

“Conventional batteries are cheaper and more common than ever, but they are often built using unsustainable materials which are harmful to the environment,” said Lyu Jian, a researcher involved in the study, in a press release. “They are also potentially harmful in wearable devices, where a broken battery could spill toxic fluids onto human skin. Our device could provide a real opportunity to do away with those toxic materials entirely.”

The new battery uses sweat as a power source. Sweat is rich in chloride ions, and it is this property that the battery exploits. It consists of a stretchable fabric onto which the researchers deposited ink containing silver flakes, to act as electrodes. The acidity and chloride ions in sweat cause the flakes to clump, resulting in an electrical charge. Because it can store absorbed sweat for long periods, the battery can generate power even when someone isn’t exercising and actively sweating.

“Our technology heralds a previously unreachable milestone in the design of wearable devices,” said Lee Pooi See, another of the developers of the new battery. “By capitalizing on a ubiquitous product, perspiration, we could be looking at a more environmentally friendly way of powering wearable devices that does not rely on conventional batteries. It is a near-guaranteed source of energy produced by our bodies. We expect the battery to be capable of powering all sorts of wearable devices.”

So far, the team tested the battery in a few volunteers. One volunteer cycled a bike for 30 minutes, and during this time the battery successfully powered a temperature sensor that was communicating with a smartphone through Bluetooth.

“Our device could be more durable than current technology, as we showed it could withstand strain from a wearer’s daily activities, and repeated exposure to stress or sweat,” said Lee Pooi See. “The slim size of our battery also solves two problems in wearable tech: traditional button batteries are a problem for achieving the sort of sleek aesthetics that are attractive to consumers, while thinner batteries reduce the item’s ability to carry enough charge to last throughout the day.” 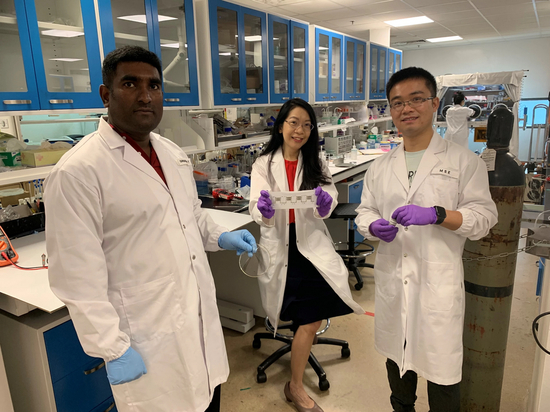 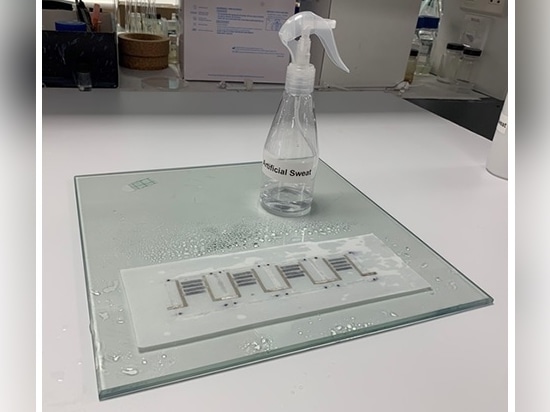 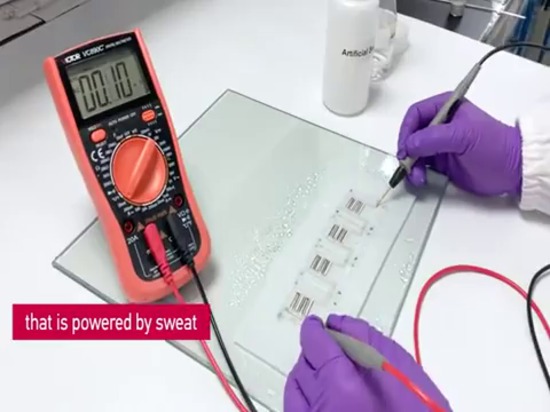 See a video about the battery