Test Detects SARS-CoV-2 in Breath, May Work as COVID Alarm in Enclosed Spaces

Researchers at Brown University have developed a breath test for COVID-19.

The breathalyzer, which they have termed the Bubbler, consists of a tube that someone blows into for fifteen seconds. The tube contains a mix of enzymes that reverse transcribe the RNA in viral particles into DNA, which allows for a subsequent benchtop PCR test.

The technology is primarily another way to collect COVID-19 test samples, but as it is measuring the virus in expelled breath. it may be more meaningful than nasal swabs in terms of indicating whether someone is actively transmitting the virus.

At this stage, many of us have undergone a nasal swab test for COVID-19. The process of inserting the swab is uncomfortable, so a non-invasive breath test would likely be more pleasant. However, measuring viral particles in the breath may also be more meaningful, since airborne transmission is one of the major ways in which COVID-19 spreads.

Moreover, detecting the virus in nasal swabs can be misleading, as people can sometimes test positive for the virus in this region even though they’re not infectious, and sometimes this can last for months. In such circumstances, the swab test is likely picking up some traces of the virus, rather than active viral particles. Breath testing may also provide more information on lower respiratory tract involvement, which is a risk factor for some of the more dangerous COVID-19 symptoms, such as pneumonia.

“Involvement of the lower respiratory tract is often a precursor to severe COVID-19, so there is an argument for a more direct sampling focused on exhaled breath,” said William G. Fairbrother, a researcher involved in the study.

So far, the Brown team tested the Bubbler in 70 patients at Rhode Island Hospital and found that it could be used to successfully detect the virus, and the results are more predictive of lower respiratory tract involvement than nasal swabs. The breath samples contained greater levels of viral RNA than swab samples from the same patients. Another application of the technology may be to act as a “COVID Alarm,” which can test the air in enclosed spaces and provide an alert if viral particles are detected.

“Such technology could be useful in restoring service to industries such as hotels, cruise ships, and casinos,” said Fairbrother. “There is also an epidemiological benefit to routine testing of air at early warning sites such as transportation hubs and hospital emergency departments.” 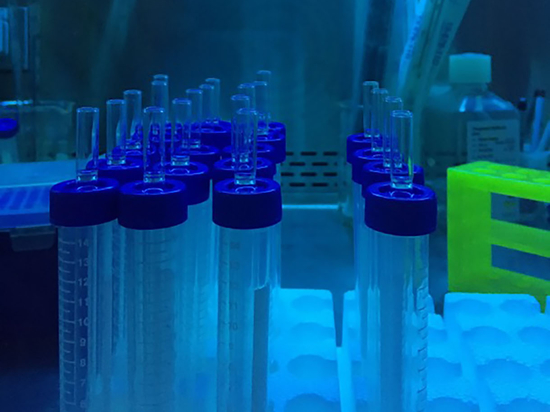 Breathalyzers were bathed in UV light to maintain sterile field prior to construction of kits prepared for the clinical trial at Rhode Island Hospital. Top image: Bubbler kits were processed in a negative pressure bench top box to prevent contamination of amplicon particles in the laboratory 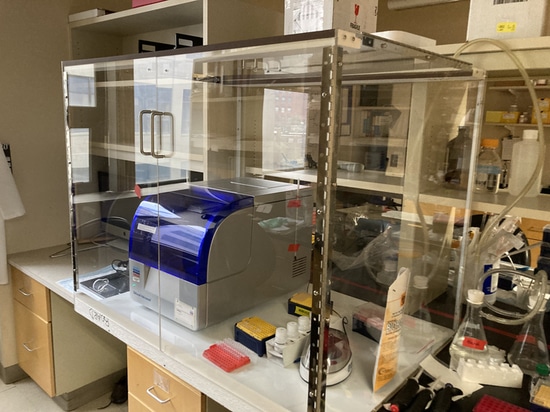