Dogs, kids, and cancer: How dogs are helping

Although the patients are different, veterinary and human medicine collaborations are becoming expected in the industry

On the daily, dogs share the human world, including kids, in ways other animals do not. That side-by-side existence makes them more than extraordinary companions. When it comes to kids, dogs are getting involved in healthcare. Specifically, they are playing a big role in helping pediatric oncologists battle osteosarcoma.

Whether you are new to practice or have years of experience, you have likely treated more than one dog for osteosarcoma. According to the American Kennel Club Canine Health Foundation, osteosarcoma is the most common type of bone cancer in dogs, accounting for 85 percent of bone tumors. It typically strikes middle-aged dogs, around age eight. On average, survival time is roughly 12 to 18 months.

These pets are not alone, though. It is rare, but children can develop the same bone cancer. In fact, osteosarcoma strikes between two and three percent of children before age 15. For these kids, the five-year survival rate is roughly 67 percent.

“It’s heart-wrenching when you think about the dogs and children who are affected by it,” says Joanne Tuohy, DVM, PhD, DACVS, assistant professor of surgical oncology in the Animal Cancer Care and Research Center in the VA-MD College of Veterinary Medicine at Virginia Tech University.

Unfortunately, there has been little treatment progress with children in decades. This is largely because the small number of kids diagnosed makes research difficult. This is where dogs can save the day.

The tumors canines develop are identical to those in children because of the shared environmental exposures. That means therapeutic measures that work in dogs will likely succeed in children. It also takes less time and money to figure out what is effective.

This is the goal for many veterinary researchers and their human medicine partners. Across the country, teams are investigating image-guided techniques and multiple drugs to see if they can achieve a double victory—improvements in osteosarcoma therapies and quality of life for both dogs and kids.

The gold standard for osteosarcoma treatment in dogs (amputation followed by chemotherapy) has not changed in decades. While most dogs rebound well from losing a limb, what if you could avoid having to recommend it or do it?

That’s what Dr. Tuohy and her research partner, Eli Vlaisavljevich, PhD, assistant professor in the Virginia Tech College of Engineering, are trying to do. Instead of performing surgery, they are working with histotripsy—a type of ultrasound technique that uses acoustic waves to destroy tumors and alleviate pain.

“This is a completely noninvasive, nonthermal focused ultrasound ablation method. It’s a potential limb-salvage option for dogs with osteosarcoma,” Tuohy says. “Breaking these tumors apart also releases proteins. So, the technique stimulates the immune system to help it recognize cancer cells and potentially slow down and reduce the incidence of metastatic spread.”

The procedure itself is simple. By delivering short, high-pressure ultrasound pulses through a transducer, the team focuses the acoustic waves directly on the tumor.

“This creates a cloud of densely packed bubbles that rapidly expand and collapse to mechanically destroy the tissue into cellular debris,” Dr. Vlaisavljevich explains. “It doesn’t create heat, but we are taking the tumor tissue, liquifying it, and breaking it up. There are no viable intact cells remaining after treatment—they’re just reabsorbed into the body.”

Two years into their research, they are seeing positive results. They cautioned while avoiding amputation is the Holy Grail, a multimodal approach that includes immunotherapy is the likely first step. Still, their efforts will have a translational impact, Vlaisavljevich says.

“The things we’re learning in our veterinary patients are going to be essential to actually advancing the design and development of the right devices for treating their osteosarcoma,” he explained. “They’re also going to contribute to developing human-size devices and clinically relevant technologies that can more rapidly become part of treating pediatric and adult patients.”

In human medicine, testing drug efficacy (especially in kids) is a lengthy, expensive process. Veterinary medicine and research have the advantage here, as well. Trials in dogs take a fraction of the time and funding typically devoted to determining a drug’s effect.

Several investigators nationwide are testing whether existing drugs can make an impact on these tumors in dogs. Their hope is two-fold. Can these medications prolong and improve the quality of life?

Via the Consortium for Canine Comparative Oncology, Will Eward, MD, DVM, from Duke Medicine, and Steven Suter, VMD, PhD, from North Carolina State (NC State) University College of Veterinary Medicine, previously tested the therapeutic potential of two drugs—bortezomib and niclosamide. It is a tale of two drugs where only one worked.

In trials with bortezomib, a drug used to treat multiple myeloma and mantle cell lymphoma, dogs continued to decline; however, even that failure was a success, says Dr. Eward, an orthopedic oncologist.

“It’s a negative result—it didn’t work. Still, it probably saved us from testing the drug in a five-to10-year trial in human patients,” he says. “Because it didn’t work in the dogs, we know to put our resources elsewhere.”

The cost difference was significant, he says. His team spent $90,000 to treat 10 dogs over one year. A human trial would have topped $1 million.

Niclosamide, a drug used to treat intestinal parasites, was a different story. The team tested whether a form of the drug called niclosamide stearate pro-drug therapeutic could extend survival rates and improve quality of life for dogs that have been treated with amputation and chemotherapy. The answer is yes.

The team is now looking into the impact of a third drug, an existing cancer drug called doxorubicin. The drug is attractive, according to Dr. Suter, medical director of NC State’s canine/feline molecular oncology diagnostic lab, because it preferentially attacks tumor tissue, bypassing healthy tissue that usually falls victim to chemotherapy or radiation. In a dose escalation trial, they are testing how much of the drug dogs can tolerate without any toxicity. They have yet to reach the dose ceiling.

“That’s really good news for us and for MDs in the human space,” he says. “This drug is clearly better tolerated by the mammalian system, and the question now is will that cause greater tumor cell death?”

Trials with existing drugs are also underway at Colorado State University. According to a recently published article in Clinical Cancer Research, Steven Dow, DVM, PhD, professor of immunology and director of the Center for Immune and Regenerative Medicine Clinical Sciences, combining two medications results in good outcomes. By pairing the blood pressure mediation losartan with toceranib, an anticancer drug that treats mast cell tumors in dogs, his team showed they can inhibit tumor growth in canines.

The hope, he says, is to help dogs side-step chemotherapy. It’s a goal he also has for children.

“With dogs, I don’t think we can avoid amputation, but we can avoid the need for chemotherapy and treat them with life-long oral drugs,” Dr. Dow says. “The long-term goal for kids would be very similar. This drug immunotherapy would be a platform to launch into other combinations.”

Although the patients are different, veterinary and human medicine collaborations are becoming expected in the industry, Eward says. It is a paradigm shift that will have extensive and long-lasting positive impacts.

“This has become much more of the norm,” he explains. “I’ll run into colleagues at human medicine meetings who have met someone I went to veterinary school with or who I’ve worked with in a veterinary context. That never used to happen.”

While working together highlights the similarities and differences in how human and veterinary specialists approach patient care, it also sparks more creative critical thinking around potential therapies. These opportunities to share knowledge are invaluable, he added.

“There’s a big value to these partnerships. Veterinarians bring a different insight and different perspective than we have in human medicine,” he says. “They’re more likely to make broad observations about cancer types. It’s a mindset to study different species, not being limited to just one.” 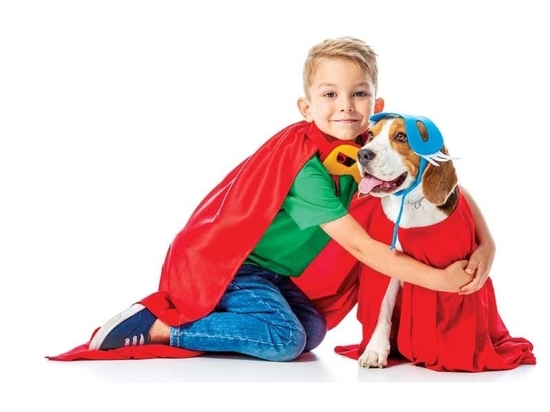 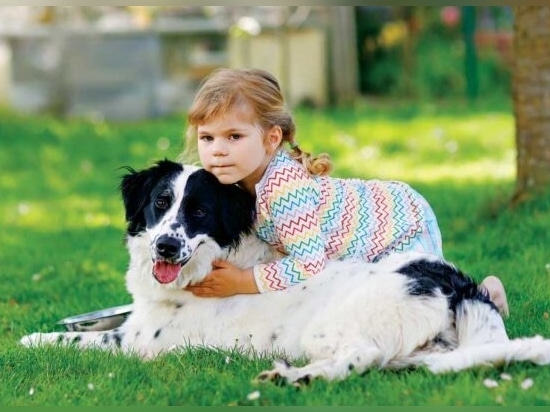 The bond between a kid and her dog cannot be overemphasized. In some, the relationship does not end there: both can develop a similar form of bone cancer.