The Artificial Knee Meets the Internet of Things

In 2012, I wrote an article about dream medical devices that could go far to advance healthcare.

Included on the list was chip-based orthopedic implants that could communicate information on wear levels, potentially prompting users that an artificial joint needs replacing.

The need for technology is high, considering that the patients receiving artificial hips and knees are trending younger, often wanting to lead active lifestyles. Meanwhile, traditional implants are designed for elderly patients who are asked to limit or cut out activities like tennis, jogging, running, skiing, or hiking. A WSJ article noted that patients were pushing the limits of new knees, while the majority of patients receiving them would be under 65 by 2016.

Recently, a medical device entrepreneur named Richard Chen wrote me saying that he had founded a company named Sensurtec (Napa, CA) that is developing a smart technology for artificial joints, including hips, knees, and spine known as Rejuvaenus. Equipped with sensors, the devices can inform the wearer or a doctor if it needs replacing and enable patients to have a more active lifestyle. The smart artificial knee is furthest along.

To learn more about the technology, I interviewed Chen, who discusses his vision for knee replacement technology and what inspired him to found the company.

MPMN: What made you want to focus on developing a smart artificial knee?

Chen: I have a personal interest in this because I have a bad knee myself. I know it is only a matter of time before I need to get it replaced. It is very scary for me to think that if I am going to get it replaced, I might need a revision at some point. If the revision doesn’t work out, I could be in a wheelchair. That’s the worst outcome.

The genesis of the idea behind the device is I read all kinds of news about things that break down in medtech. After hearing about joint implants, I thought to myself: "there has got to be a better way to do this." You really want to intervene early when a joint implant approaches the end of its useful life before complications occur. Just like replacing brake pads in a car instead of the entire brake system.

The technology really comes from my background in linking up my different past experiences. I have been involved in a wide range of technologies, from doing neurophysiological research, where I used build electronic boxes to do signal processing for intracellular recordings to advising various wireless and networking tech startups. And I connected all that to my experience with medical practice.

I didn’t work in medtech in the early part of my life so I am perhaps more willing to cross boundaries. Having seen how quickly consumer tech moves, I could see that a lot of medical products were not cutting edge even though the applicable technologies themselves are time tested and proven. But sometimes you want to try something in a different way. And in this case, I wanted to apply the Internet of Things idea to artificial joints, and the knee implant in particular. An alert to check your knee implant would have far greater value than one to replace an empty carton of milk in your fridge, right?

MPMN: How far along is the technology now?

Chen: We have functional prototypes. We are considering partnering or building our own system. We are exploring those possibilities right now.

Clinical testing will be a little bit further down the road. It should require little clinical testing though. You can think of this technology as a cost efficient, independent channel for monitoring. It doesn’t interfere or get in the way of the functional part of the device itself. It also doesn’t get in the way of other diagnostic methods whether it is MRI, x-ray, or anything else. We anticipate approval via the 510(k) pathway at FDA.

What is important that it allows for personalization of diagnosis. We are individuals with different activity levels. In medtech, people talk about statistical lifecycle of a medical device. That’s critical but once it is implanted, from a patient’s and the surgeon’s point of view, you care only about the one that is actually in you—not the lifecycle of devices in a large sample of people.

MPMN: How would this device be used to determine the wear level of a knee implant?

Chen: We can tune our technology to a dedicated handheld that can be used by anyone in the doctor’s office or to the latest iPhone, allowing people theoretically to test their knee implant at home. The app could show a traffic light: red light, yellow light, or green light indicating the state of the implant. The green means everything is fine; yellow means it is partially worn through — for example, 50% worn through at this point; and red means impending failure.

It would save a patient from the hassle of having to go to the doctor to determine the wear level of the implant. The data is unequivocal and actionable and that is what is helpful.

Paradoxically, anything that has a long life and does not fail easily, the cost of doing this kind of extended routine monitoring is more expensive because the yield per diagnostic test is low. With this convenient screening technology, the cost is negligible and compliance is also better.

MPMN: Can you walk me through how it works?

Chen: Basically, we have sensors embedded in the part that could fail. Usually when a device fails, there is a structural component or a part of the component that fails first. And if you can monitor that part, you can detect failure or even impending failure. In the knee, the wear usually starts by pitting and fracturing in the polyethylene insert, which propagates as time goes on. Our technology detects this wirelessly. 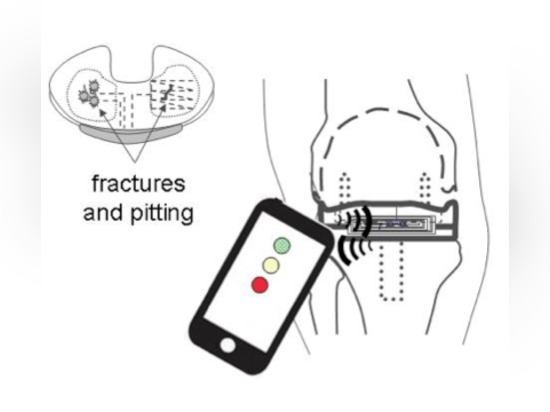 The smart knee implant from Sensurtech could send signals to a smartphone app, telling the patient or doctor about the device's wear levels.
*Prices are pre-tax. They exclude delivery charges and customs duties and do not include additional charges for installation or activation options. Prices are indicative only and may vary by country, with changes to the cost of raw materials and exchange rates.
Compare
Remove all
Compare up to 10 products