Officials at pioneering flexible electronics company MC10 are researching how to adapt their technology to track the progression of Parkinson’s disease, muscular dystrophy, ALS, and similar movement disorders.

The questions they are asking involve design challenges that most device designers in the mobile health space need to consider.

The tracking devices could help Brussels, Belgium–based UCB better gauge the effectiveness of pharmaceuticals that UCB has in its pipeline, Nirav Sheth, director of medical market development at MC10, recently told Qmed.

“The kind of investments that pharmaceutical and biotech companies make today could be sped up—to get ‘go’ or ‘no go’ decisions,” he says.

The underlying template is MC10’s Biostamp platform, a sensing sticker that flexes, stretches and moves with the body.

MC10 co-founder John Rogers, PhD, of the University of Illinois-Champaign, spent years figuring out how to how to bake thin silicon circuits on a silicon base or substrate, chemically wash away the silicon surface underneath the circuit, and then use a specially designed rubber stamp to ever-so-gently transfer the thin circuit away to a flexible base.

The silicon circuits are a fraction of the width of a human hair. Along with elastic rubberlike polymers, they form complete powered systems that sense, measure, analyze, and communicate information including data from the brain, muscles, heart, body temperature, and body movement. Thin film battery technology can be recharged wirelessly.

The Biostamp is pretty amazing in itself. But it is just a start when it comes to the questions that MC10 designers are asking as they seek to use it as a movement disorders tracker. Here are four of the top questions:

1. Can You Make It Invisible?

The future of wearables is invisible, according to Stuart Karten, founder and president of Los Angeles–based design firm Karten Design. “‘Invisible’ means moving technology into the background. It’s putting human interaction and emotion back in the mix and respecting both,” Karten explained at the 2014 Body Computing Conference at the University of Southern California on October 3.

Sheth seems to agree with the idea, not just because comfort is important but because patients with disorders such as Parkinson’s do not want to be reminded that they are patients.

“A lot of these folks are trying to hold onto as much normalcy of their life as they possibly can. The thing they’re trying to do the least is be reminded that they’re a patient every day,” Sheth says. “The idea that you can come up with a device that can have a consumer-type aesthetic versus a patient-type aesthetic is really important.”

Sheth thinks flexible electronics can help: “We think we can provide a sense of wearability, this ability to be compatible with the contours of your body and hence be comfortable, and hence you’ll be more likely to actually wear it.”

It is also worth noting the device cannot be usefully collecting data if the patients do no wear it.

Invisibility can be achieved through flexibility, along with smart decisions related to where the device is placed, how long it is placed, and whether comfortable adhesives are used, Sheth says.

2. What Should It Measure?

Tracking movement seems to be at the top of the list in the case of the UCB partnership. “We have the ability to give them information about their condition on a routine basis that may lead to changes in dosages or frequencies, or what kind of drug you are on or not on, or what is working for you.”

MC10’s Biostamp not only has an accelerometer or gyroscope, but also the ability to track muscle activity, heart rate and similar measures, according to Sheth. “It’s really the ability to characterize movement.”

New streams of important data could be discovered along the way.

Mike Smith, chief technology officer at patient monitoring device company Preventice, had similar sentiments in late October at MD&M Minneapolis: “The devices are the easy part. The hard part is figuring out what to do with all the data available to us.”

Smith says it is even hard to decide what information to filter out. “Now that we can continuously monitor someone with a wearable, what does that open up for us? We’ll probably discover things we never knew to look for before,” he said.

The data could potentially answer all types of questions: “Is your muscle tone improving? Are you getting the exercise you need coming out of this episode?”

“Having a more objective, continuous and validated data stream becomes helpful to provide a complete picture of what the person is experiencing,” Sheth says.

Validating data will be one of the key areas MC10 will have to work on if it is to win FDA approval to use a Biostamp-based device to track movement disorders.

4. Where Should The Sensor Go?

MC10 and UCB aren’t the only outfits developing a device to track Parkinson’s and similar disorders. Intel and the Michael J. Fox Foundation for Parkinson's Research announced over the summer that the two are teaming up to leverage wearable technology and Big Data in the battle against Parkinson's Disease.

“I think at the end of the day, the thing that separates us is putting the device where we can collect data that is most pertinent,” Sheth says. That means getting sensors on the legs—maybe something adhesive on the leg, maybe something worn inside a sock. MC10 will have to work with patients to find a solution that is “truly distinctive.”

“Sometimes it may be the device itself, but sometimes it’s limited not by the sensor but where the sensor is located.,” Sheth says. “If something is on your wrist and you’re on a treadmill versus walking on the street versus walking up the stairs, it leads to very different outcomes for people.”

Strapping on a sensor or wearing it around the wrist may not be as useful for mobility disorders, Sheth says. “The ability to easily wear something on the lower half of the body should provide you more information.” 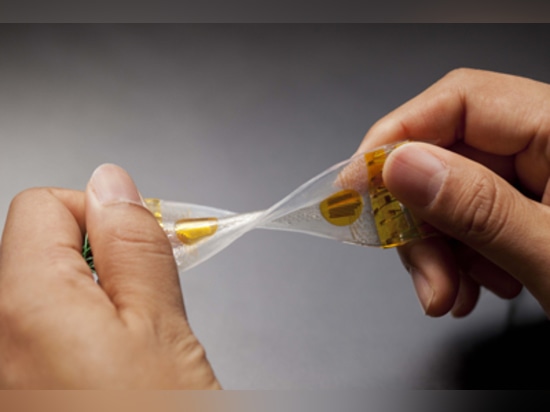 MC10 has technology for flexible, stretchable electronics. (Photo courtesy of MC10)
*Prices are pre-tax. They exclude delivery charges and customs duties and do not include additional charges for installation or activation options. Prices are indicative only and may vary by country, with changes to the cost of raw materials and exchange rates.
Compare
Remove all
Compare up to 10 products