Now in its fifth year, the AACC Disruptive Technology Award supports diagnostic developers at the forefront of science and technology in laboratory medicine. It also gives clinical laboratorians the opportunity to evaluate novel technologies and their potential impact on patient care.

The company was cofounded in 2019 by Amoga Tadimety, PhD (now CEO), and Alison Burklund, PhD (now CTO), who met while studying at Dartmouth College, where they were both fellows in the Dartmouth PhD Innovation Program. Not only were they able to complete their doctoral degrees, but they also had access to courses at Dartmouth’s Tuck School of Business, which offers specialized training in technology translation. Nanopath started with a seed round of venture-backed funding in October 2020 and secured $10 million in Series A funding in August.

Because the Nanopath platform uses ultrasensitive optical detection, it eliminates the need for nucleic acid amplification, enabling it to provide what the company calls clinically actionable genetic information in 15 minutes. The founders have focused this technology on pelvic and gynecological infections because of what they see as a lack of technological advances in women’s healthcare. They hope that it will become the go-to system for routine, point-of-care testing during women’s health screenings.

This interview has been shortened and edited for clarity.

HOW DID YOU AND COFOUNDER ALISON BURKLUND GO FROM RESEARCHERS TO ENTREPRENEURS?

We met at Dartmouth when I was working on my PhD at Dartmouth’s engineering school. My research focused on different aspects of disease diagnostic problems—things like a chip integrating multiple laboratory functions onto a single substrate, and asking, how do we find one rare cell in a complex biological matrix like blood or urine?

Alison was working on ultrasensitive biosensing and how to probe genetic material. We pushed our thesis work together, and that’s how Nanopath was formed.

We were also both fellows in Dartmouth’s PhD Innovation Program. It’s a unique program where you do the full rigor of the PhD along with classes in Dartmouth’s business school.

In 2019, before we’d graduated, we formed Nanopath as a grant writing vehicle. In 2020, we participated in the Rice University Student Business Plan competition and came in second place, with a prize of about $150,000 in funding. On the heels of that, we had a lot of momentum. We’ve both been working on the company full time since April 2021. That’s when we officially left Dartmouth and secured space in Cambridge, Massachusetts.

WHAT’S SOLID-STATE BIOSENSING? HOW DOES IT WORK?

By “solid-state,” we’re referring to biophysics instead of biochemistry. Think about PCR or any type of nucleic acid amplification, where you make many, many copies of DNA or RNA in order to detect it.

Instead, we’re using novel transduction mechanisms and inherent material properties of nanosensors to detect binding events of target DNA and RNA sequences. Surfaces and substrates absorb light at a particular wavelength, emitting a particular color when DNA or RNA binds to the surface. We observe a color change that’s not visible to the naked eye. There’s no real chemistry going on here. Instead, we’re using the inherent physical properties of the sensor and material.

HOW IS THIS BETTER THAN OTHER TECHNOLOGY ON THE MARKET?

We’re eliminating the need to make copies of RNA and DNA in order to detect it. There are point-of-care PCR tests on the market that still take 25−28 minutes. Despite hundreds of millions of dollars being pumped into research to reduce turnaround times for PCR tests, it’s not going to get much shorter.

Our platform needs only 15 minutes, which is our total analytical time, including sample preparation. Doctors’ office visits are only 15−20 minutes. That’s our hypothesis for why a lot of point-of-care PCR tests are not integrated into workflows. 25 minutes is just too long. So we believe Nanopath aligns nicely with existing workflows.

And unlike PCR, which can detect 1−5 targets, it’s very easy for us to detect 10−25 targets. It’s as simple as switching out the probe on the sensors. There’s no reoptimization

Nanopath’s platform also brings granularity of information to point-of-care testing that has never really been accessible previously, including mutation information and antimicrobial resistance genes. These are all things I think we have the ability to do on our point-of-care system.

WHY HAVE YOU FOCUSED ON WOMEN’S HEALTH?

When we originally started, we pitched our platform as relevant to any situation where you’d want to detect a genetic target: sepsis, liquid biopsy, and briefly, SARS-CoV-2. But do we want to wake up every morning and be a respiratory diagnostics company?

We talked to more than 100 people, including clinical laboratory directors and payers, to figure out where this technology might fit best and where there’s market alignment. We found that there was a clear, unmet need in the outpatient women’s health space, which is obvious to both of us in retrospect.

As women, we’ve experienced the significant lack of effective diagnostics in the outpatient healthcare setting. Right now, the standard technology in this area is microscopes and urine pH paper test strips. That’s insane to us, considering the breadth of pelvic and gynecological infections that people might seek care for, including urinary tract infections and sexually transmitted diseases. What’s in use right now lacks specificity and sensitivity.

Instead, we can be that one-stop shop. There’s a huge unmet need, and we’re really excited to be here. We’re both passionate about this. It’s something we can get behind. We’re deeply motivated by pushing towards more equitable healthcare.

WHAT WERE THE BIGGEST HURDLES TO MAKING THIS TECHNOLOGY WORK?

We have a lot of manufacturing de-risking that we need to do. We’re also trying to answer questions on how to make this at scale and stable at room temperature. But we’ve demonstrated that this works on the bench, and the preliminary data is really compelling.

We need to do a lot of commercial work to understand which targets need to be on our panel for whatever disease space we’re interested in. Do clinicians want everything in the same cartridge or for specific pathogens? We’re onboarding a commercial hire to talk to clinicians about what these panels should look like.

WHAT’S THE BIG DREAM WITH YOUR TECHNOLOGY?

There is so much work to be done in outpatient women’s health. I will go to bed happy if we see this product really make a dent in that space.

We have an active push internally to make the read-out instrumentation smaller. Right now, it’s about the size of a toaster, but we think it can be much smaller and much cheaper. We’re hoping to enable testing at home and increase access for rural populations globally so that the technology we offer is not only serving a population that is already well served.

I joke that our first company car is going to be a van, but portable mobile health really is our goal. I want this technology to be accessible all over the world, and if it’s limited to the women’s health space, that’s fine. But I will be disappointed if it’s only serving a small population. 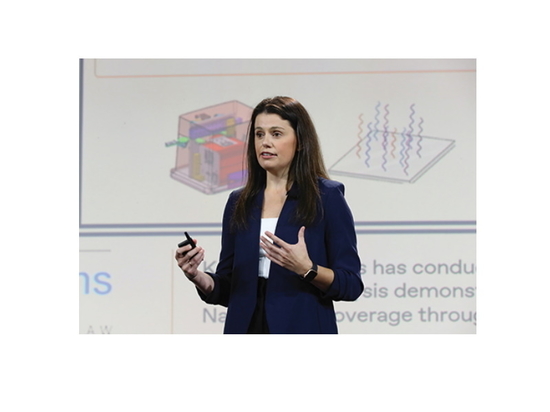