“No one should be in jail just for using or possessing marijuana. I’m taking steps to end our failed approach.” That’s what President Joe Biden tweeted late last week, before outlining steps that included calling on the Attorney General to review how the drug is scheduled under federal law—which right now has it on the same level as heroin but more serious than fentanyl, the drug that is primarily fueling the current opioid crisis.

Biden’s words and actions are not surprising given the turning of the tide for marijuana in the last handful of years. For example, the recreational use of cannabis is now legal in 19 states and the District of Columbia. While this legalization and decriminalization has residual affects across many areas of life, for chemists, it’s a scientific challenge.

“When I grew up, people were taught not to drive drunk. I haven’t seen the same type of messages for marijuana yet, and statistics indicate more than 14 million people in the U.S. smoke marijuana and drive. Our goal was to devise a very simple solution that could be adopted by society,” said Neil Garg, a UCLA organic chemistry professor who has spearheaded the creation of a new marijuana “breathalyzer” with former colleague Evan Darzi.

THC, the active compound in marijuana that leads to a high, is much different than, for example, the level of ethanol that is measured with a traditional alcohol breathalyzer.

THC can linger in the body for days, weeks or even months after marijuana use without any residual cognitive effects. For example, a standard blood test can detect 1 to 2 ng/mL THC in the blood of a chronic user for two days. In Colorado, the legal limit is 5 ng/mL, so the chronic marijuana user who last ingested the plant two days ago would be fine. However, in a “zero tolerance” state, the user would find themselves arrested—even if their last marijuana ingestion was two full days ago.

In 2020, Garg and then-postdoctoral researcher Darzi established a proof-of-concept for THC detection that is similar to the process behind an alcohol breathalyzer, which converts ethanol into an organic chemical compound through the loss of hydrogen. The researchers discovered that removing a hydrogen molecule—a process known as oxidation—from the larger THC molecule caused it to change colors in a detectable way.

To stimulate oxidation of THC, the duo applied an inexpensive, scalable approach—electricity.

“Some of our initial ideas involved trying to get complicated molecules to bind to THC in order to detect a signal,” said Garg. “After a while, we realized the simplest solution is to pump electricity into THC and have a chemical reaction occur that produces a change we can detect. It doesn’t matter what the change is, as long as it is easy to detect. Oxidation is one of the simplest reactions one can do to a molecule.”

Garg and Darzi have been working to leverage their chemistry solution to create a simple THC breath analyzer device, even establishing a UCLA spin-off company called ElectraTect. And now, two years later, they have taken their first big step toward that goal.

In a paper recently published in Organic Letters, Darzi, now the CEO of ElectraTect, Garg, and ElectraTect researchers detail how their new laboratory-scale THC-powered fuel cell sensor functions. When THC comes into contact with a negatively charged electrode, or anode, on one side of the device’s H-shaped glass chamber, it oxidizes into a new compound called THCQ, sending electrons across the chamber to a positively charged electrode, or cathode, on the other side, generating a measurable electric current. The higher the concentration of THC molecules, the stronger the current.

The advance marks the first time THC has been used to power a fuel cell sensor. The relatively simple, inexpensive technology—once perfected—can be scaled up for economical mass production.

The researchers said they are currently working to refine the device to detect and measure THC in exhaled breath and to shrink it to a more compact size suitable for use in a handheld breath analyzer or ignition interlock device.

“We want a simple breathalyzer that doesn’t require specialized training because a police officer is not a trained synthetic organic chemist,” said Darzi.

While a commercial marijuana breath analyzer based on their technology would still be several years off, Darzi and Garg stressed that such a tool could ultimately have benefits beyond traffic safety and law enforcement. Their technological breakthrough, they said, could ultimately be used in any situation where fair marijuana testing is critical, including in the workplace, or even at home where individuals could use it proactively—before they ever get behind the wheel. 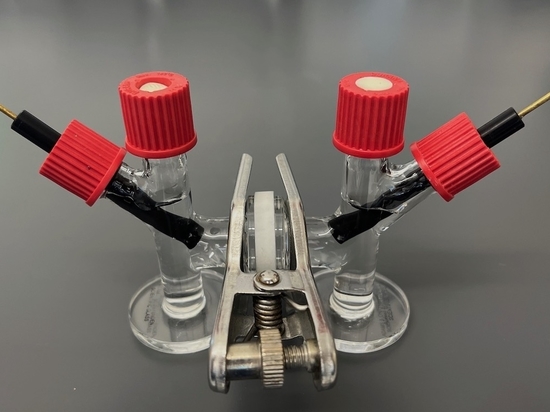