A team of researchers at the University of Tsukuba in Japan has developed a fluffy soft robot that patients can interact with to reduce their stress and fear when undergoing painful or uncomfortable medical procedures.

For some patients, particularly children, a fear of needles or uncomfortable and painful procedures can make such experiences especially challenging, and may mean that they attempt to avoid treatment altogether. Finding ways to calm and reassure such patients is important in reducing their distress and enabling them to undergo necessary treatment. The robot has inflatable actuators that can interact with and clench the patient’s hand, mimicking a sense of human touch. The researchers found that the robot can act as a distraction and exert calming effects on patients.

Most of us accept the necessity to potentially experience a little pain and discomfort during certain medical procedures, such as receiving an injection. However, for some patients, such procedures can be a source of significant stress and fear. Needles hold a significant fear for many patients, with some disliking the experience of injections so much that they may avoid important shots. This can have both personal and societal consequences. During the COVID-19 pandemic, such patients may have been less likely to avail of protective vaccines, for example.

There is a need to develop strategies that assist such patients in overcoming their fear, or at least tolerate it so that they can receive treatment. These researchers in Japan have turned to soft robotics as an answer, with the hypothesis that squishy and adorable robots (our words, not theirs) may provide a proxy for human touch and a distraction during potentially painful or uncomfortable procedures.

“It is well known that interpersonal touch can reduce pain and fear, and we believe that this effect can be achieved even with nonliving soft robots,” said Fumihide Tanaka, a researcher involved in the study. “Our results suggest that the use of wearable soft robots may reduce fear as well as alleviate the perception of pain during medical treatments, including vaccinations.”

The robot designed by the researchers is small, fluffy, and handheld. It contains inflatable components that can actuate in response to someone clenching it, and it can clench the patient’s hand back. So far, the researchers have tested the device with volunteers who experienced a moderate heat stimulus, which caused a little pain.

The researchers report that volunteers who had access to the robot during the test reported reduced pain levels, and saliva tests for stress biomarkers showed a reduction in oxytocin and cortisol, suggesting that interacting with the robot had helpful effects on pain and distress. 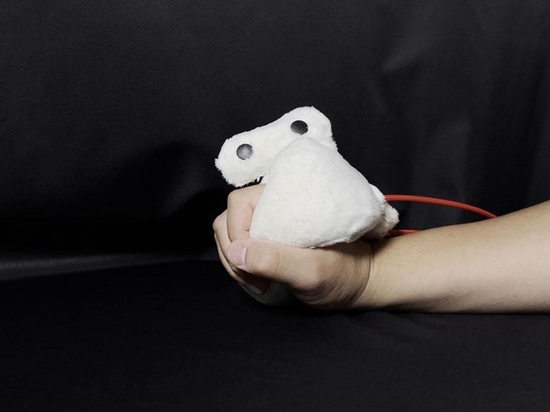