Electronics startup MC10 is developing a patch that adheres to skin to monitor patient vitals and deliver drugs.

Researchers from flexible electronics startup MC10 in conjunction with researchers at Seoul National University in South Korea have demonstrated that patient monitoring, information storage, and drug delivery can be integrated into a package the size of a Band-Aid.

In a paper published in March in the journal Nature Nanotechnology researchers led by Dae-Hyeong Kim, assistant professor of chemical and biological engineering at Seoul National University, demonstrated that a patch placed on pig skin could release a dye after detecting muscle tension.

The implications according to Roozbeh Ghaffari, co-founder and Director of Advance Technology at MC10, show huge potential for treating patients with neuromuscular and neurodegenerative conditions such as Parkinson's disease. “It's not only doing monitoring in this epidermal format but storing information and then ultimately actuating the release of drugs that could help keep a certain ailment under control like Parkinson's,” Ghaffari says.

The patch which is only a few centimeters wide and about the thickness of two sheets of paper, is built in layers, containing a sensor, a drug layer infused in an adhesive layer, and a memory module. The patch is attached to the skin, where the sensors can detect when they are stretched because of skin movement caused by muscle tension. Based on how frequently this stretching happens the sensors are able to indicate whether the stretching was a normal movement or from a tremor. The patch can then record this data and, if necessary, release drugs to manage any tremors. The drugs would be surrounded by porous silica nanoparticles. When triggered, a heating element in the patch breaks this bond, allowing the drug molecules to diffuse through the skin.

This combination of drug delivery and patient monitoring would allow for more accurate treatments that could be catered more specifically to patients. “Patient A may have very good response to a drug in the form of patch release. You don't want to necessarily change up their drug profile. The monitoring data would reveal that,” Ghaffari says. “Whereas if you had Patient B, who isn't responding at all and exhibits signs of tremor and dyskinesia, or things are off with their medical dose, then you can effectively figure out the what the best option is for that patient based on their response, which you can track quantitatively versus a diary or journal that the patient would keep.”

Ghaffari says the current patches utilized an external power source, but future models will employ a rechargeable onboard battery. “Typical systems that we're building to commercialize now on the diagnostic side have a thin film lithium polymer battery half a millimeter or larger built in,” he says. He adds, while the drug sticker portion of the patch would have to be replaced daily, the patch itself, if it's made robust enough, could last for several months.

The concept of the patch is an extension of research done by MC10 co-founder John Rogers, currently Director of the Seitz Materials Research Laboratory at the University of Illinois, Urbana-Champaign. In 2011 Rogers published a paper in the journal Science where he discussed the creation of flexible electronics that can be comfortably attached to the skin. It was the first demonstration that silicon-based devices in a nanomembrane format can be laminated onto the skin to measure different vital signs.

Ghaffari says this latest research was designed to build on Rogers's work. “The real challenge is how do you build a system that is worn on the body, is seamless and invisible to the user, and is able to track activity,” he says. “And not only that what if we went even further and started integrating nanoparticles and drug therapy onboard this same patch?”

Since different drugs have different delivery requirements it is not likely to see a patch that will be able to deliver multiple treatment options. The study also cautions that “technical challenges, such as the fabrication of high-performance, energy-efficient sensors and memory modules that are in intimate mechanical contact with soft tissues, in conjunction with controlled delivery of therapeutic agents” could limit widespread adoption of this technology.

However Ghaffari says MC10 will be conducting further testing in pre-clinical and clinical settings to determine their effectiveness with patients. “Ultimately we'd like to develop disease-specific patches that have a disease specific drug in them.” 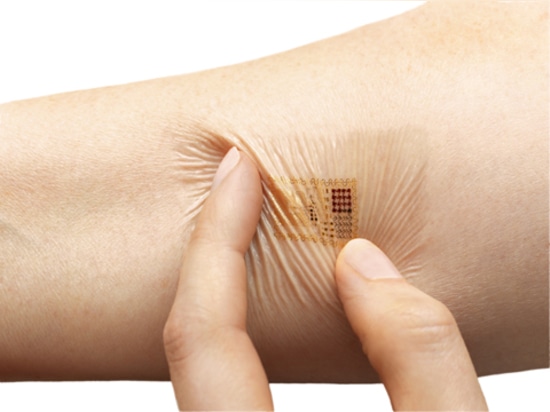